Every year, the UK government releases a comprehensive dataset showing average GCSE grades at each school alongside demographic information about the schools. You can download the data yourself here.

For obvious anonymity reasons, the government don’t provide the grades of individual students. Nonetheless, it’s a fascinating dataset that can be used to look at the relationship between different demographic variables and educational achievement, as well as to track changes in GCSE results overtime.

When the 2018-19 GCSE data became available in a couple of months ago, I’d been planning to take a look at the data primarily to explore how things like school size, school type and economic background of the students affect GCSE grades.

Although I’m still going to be doing that here, with the rise of the COVID-19 pandemic, and resulting school closures, the dataset has now become interesting for other reasons; schools in the UK are now shut and the government recently announced that GCSE and A-level exams have been cancelled. Instead, grades will be awarded by Ofqual using a combination of teacher assessment, prior grades and other school data. Ofqual haven’t yet explained exactly how this will work.

Understandably, this has generated a fair bit of concern from students, parents and teachers. I suspect that students, on the whole, will have been hoping for grades to be awarded on the basis of teacher predicted grades, and may be suspicious of any algorithms or processes that Ofqual might use.

Obviously, with only aggregated data at the school level, I can’t answer that question, but the dataset does at least enable me to answer a proxy question - how well could the government predict the average grades for individual schools?

Progress 8 is a measure of how well a student has progressed relative to other pupils nationally who have achieved similar prior attainment. The measure basically compares the student’s progress 8 to the average score obtained by students in their prior attainment group. Details of how it is calculated can be found on the Dept for Education’s website. Progress 8 can be a bit of a tricky measure to interpret for a number of reasons, particularly at the school-aggregated level, because it is sensitive to outliers. Irritatingly, progress 8 scores are also not shared for Independent schools.

Excluding these schools, I end up with a data set including grammar schools, state schools, and special schools:

Alongside the school name, we have the following variables:

(There are many other accompanying variables in the full dataset, although I have captured the main demographics available here. The code used to clean and extract these variables can be found on my “GCSEs” github project).

The distribution of school average attainment 8 scores is as follows: 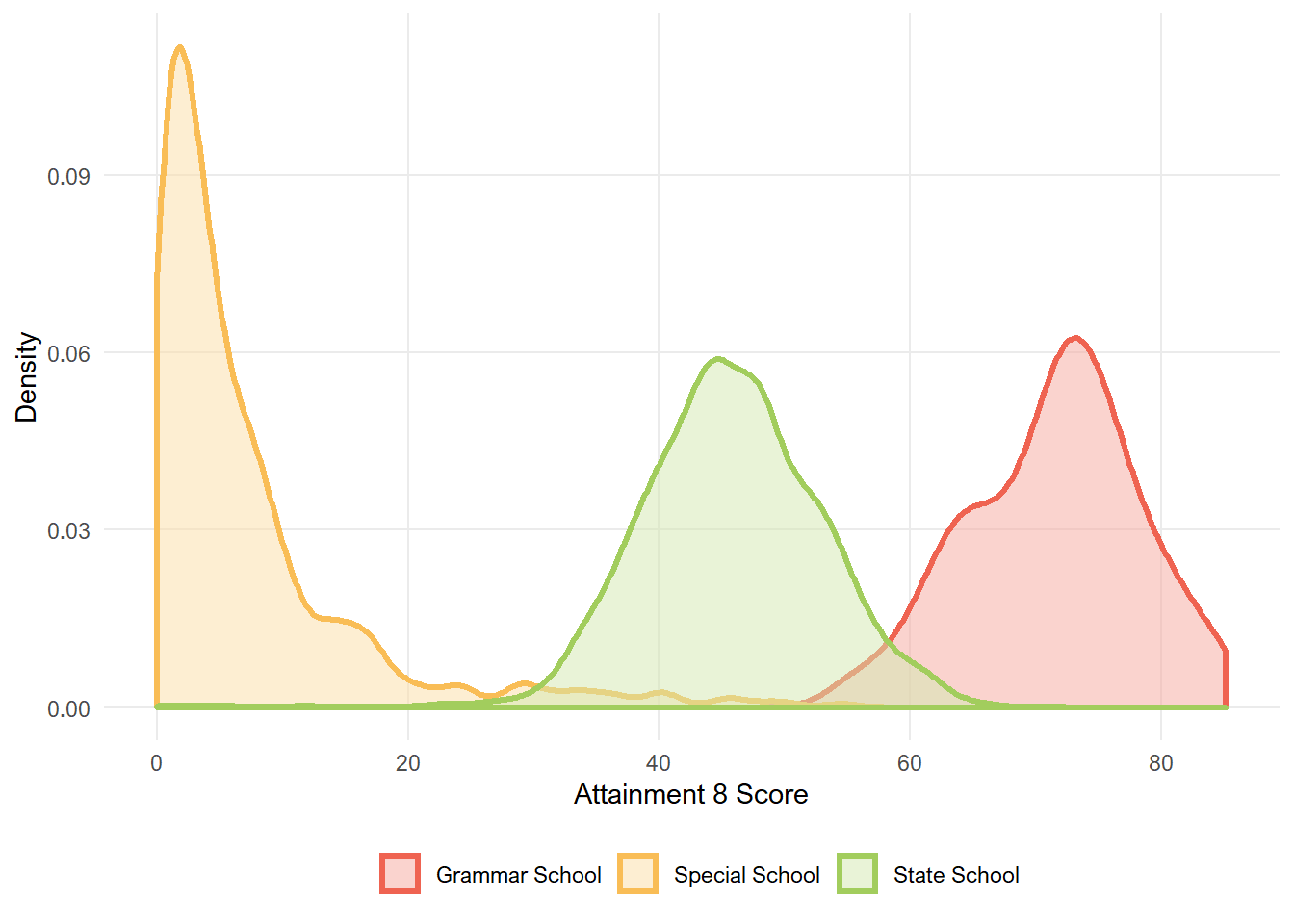 We can see that for state schools, the data is roughly normally distributed, with slight negative skew.

Special schools have much lower attainment 8 scores, and the data is positively skewed. It’s worth noting that students in special schools may not always do the same qualifications which is likely to make the scores hard to interpret. As a result, I’ll be excluding special schools from further analysis.

The plots below show how attainment 8 varies depending on each of our other demographic variables. 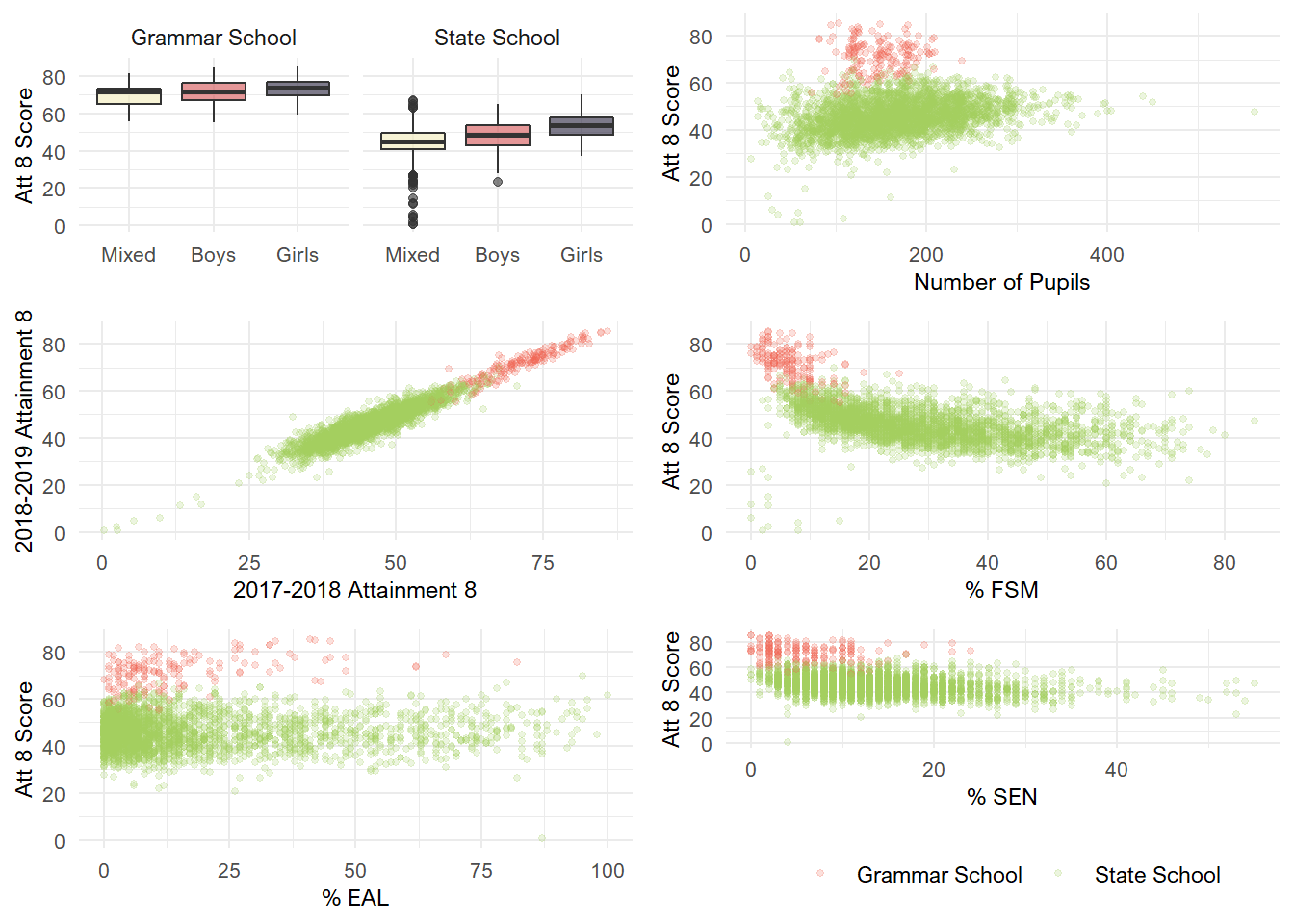 The relationships vary in magnitude, but it looks like all of these variables share some relationship with attainment 8 scores. Notably, this is very much more true for state schools than grammar schools.

The variable most correlated with attainment 8 is clearly the school’s 2017-2018 attainment 8 score. This is particularly interesting given that the government has implied that they may use the prior grades of schools to moderate student grades assigned to students this year.

The percentage of FSM students also share a substantial correlation with attainment 8. Not that surprising given the established relationship between income level and educational achievement.

To model the effects of each variable on attainment 8, I’ve opted to use multiple linear regression. (I did also play around with quantile regression on this dataset, which I may blog about in a separate post…). It’s probably not the technique that yields the best prediction accuracy, but I want an interpretable model. I think opting for something interpretable is more realistic too - the goal of predicting student grades to replace actual exam grades is so high stakes that I suspect if the government were to do this, they’d want a model they could understand!

Since this is a prediction task, I’m dividing the data into a training set to develop the model, and a test set for model validation:

This is the model summary on the training set:

And here are the diagnostic plots: 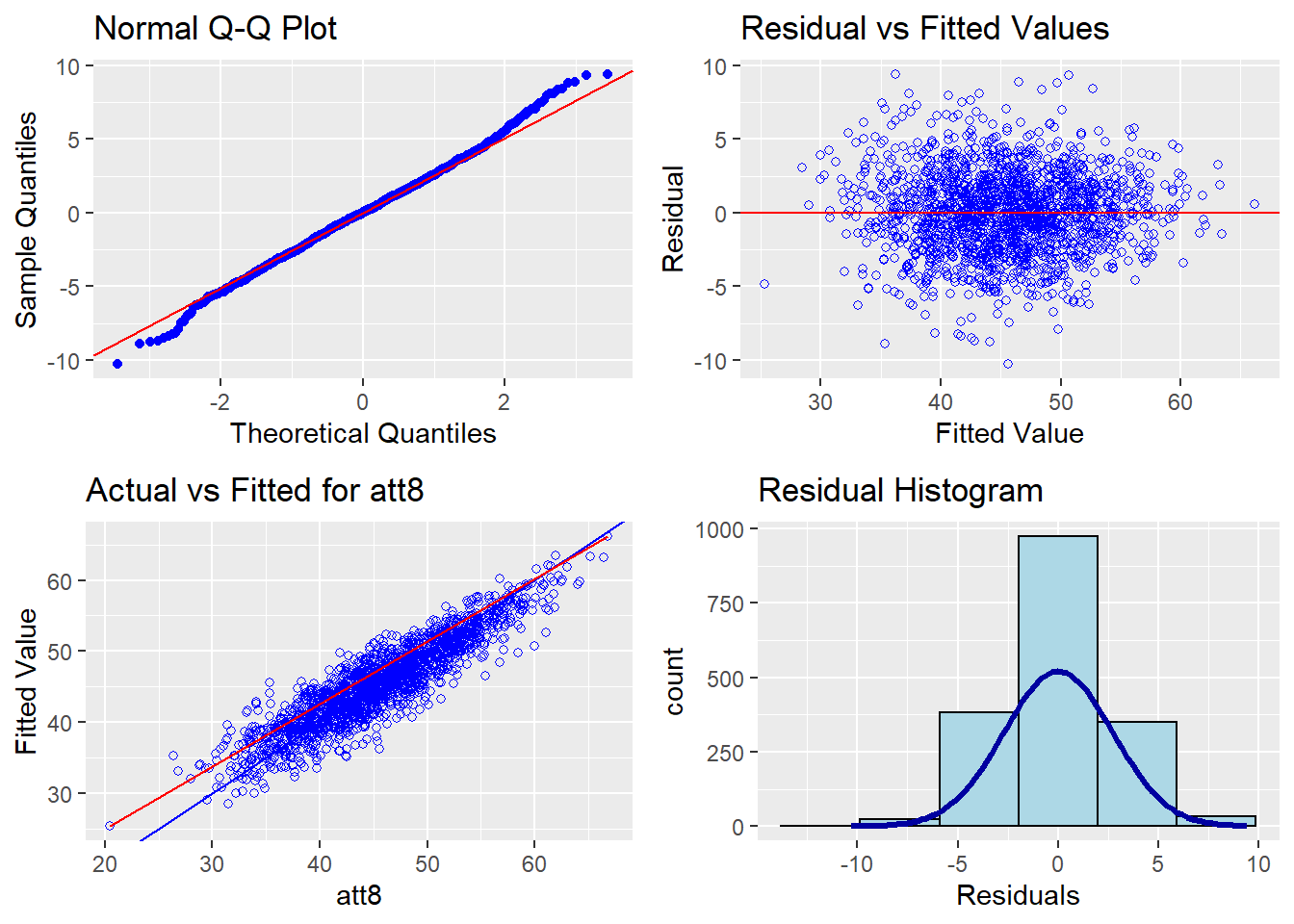 So what can we tell from this? Well, for a start, all of our variables are significant predictors. As it stands, the model accounts for ~ 84% of the variance in school attainment 8 scores. This is pretty good, although far from perfect. The school’s prior grades appear to be one of the strongest predictors of the 2018-2019 grades. (And it might be an even stronger predictor had I included data from years prior to 2017-2018 as well). The gender distribution in the school is also an important predictor, with all-girls schools achieving significantly better grades than mixed and all-boys schools.

The diagnostics are also interesting: the assumptions of linearity and normality hold up pretty well, although there is some deviance in residuals in the bottom quantile. The plot of actual versus fitted values is also enlightening - from this we can see that the model does least well at predicting the values for schools with lower attainment 8 scores, and tends to underestimate values for these schools.

Now, this is how the model performs on the training data, but what about the test data?

Reassuringly, the root mean square error and adjusted R2 look very comparable to those obtained with the training data. The plot of actual versus predicted values also looks pretty good: 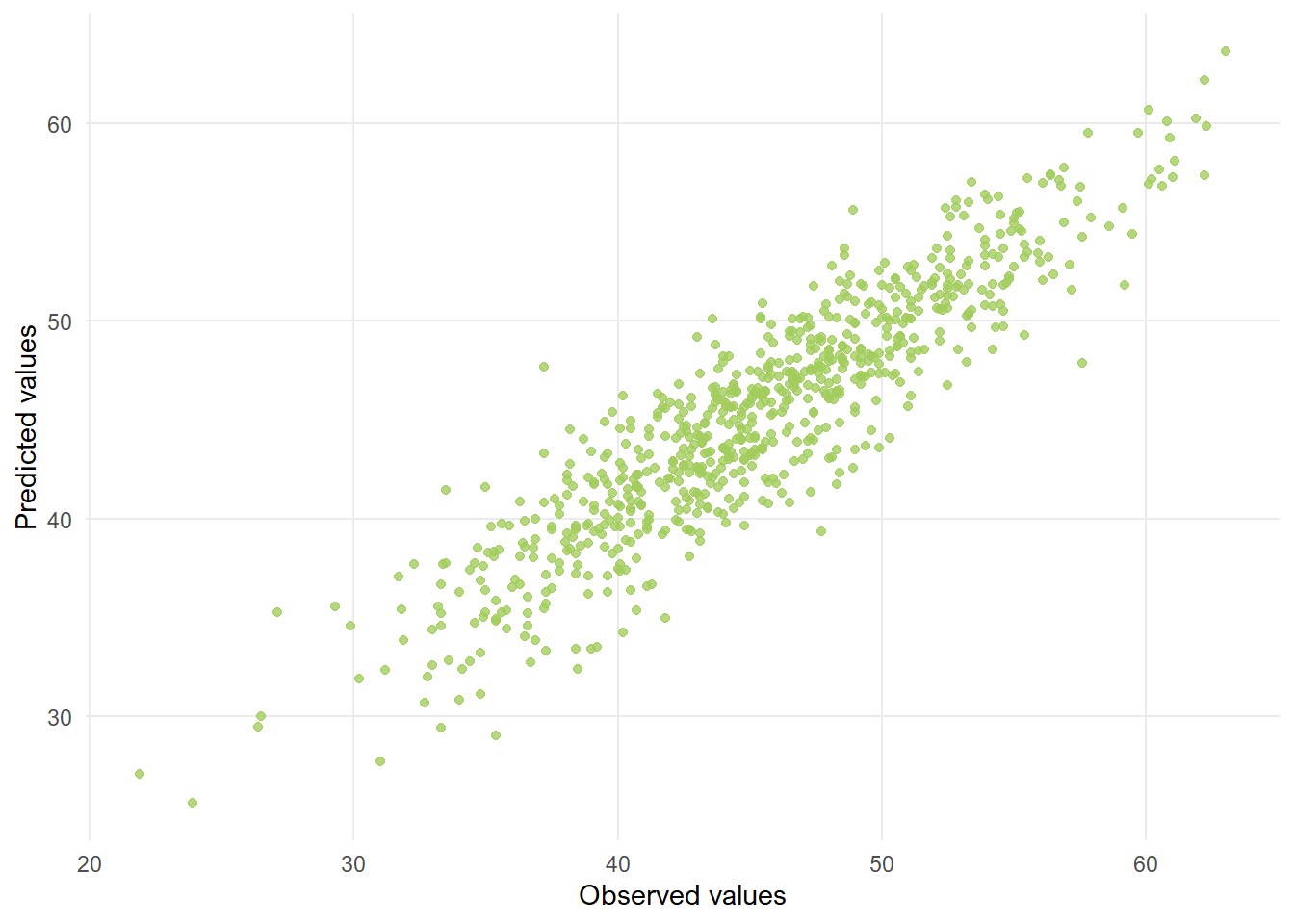 The model fit achieved even with this simple model suggests that student grades could be predicted reasonably well from existing data. I suspect that with access to individual level data, the government could achieve an even better fit.

That being said, there are still some problems:

The biggest issue with inaccuracy lies in the fact that the model becomes less accurate for schools with lower attainment 8 scores, which are often the schools with the most economically disadvantaged students. Since the model underestimates grades in these schools, it looks like students at these schools might be the most disadvantaged by a solution that relied on prediction based on prior data. This is likely to be compounded by the fact that these schools tend to display more variability in grades both within and across cohorts. Hopefully this is something that Ofqual will take into consideration.

Nonetheless, given that Ofqual are likely to use a school’s prior grades to moderate student grades this year, it’s interesting to see that it can be a pretty strong predictor of grades (at least at the aggregate level). I’d be keen to find out how they’re planning to use this information. (Update: The most recent statement suggests that prior school performance is likely to play an important part in moderating teacher judgements!)

Fundamentally, there’s no perfect solution to this problem. I think using both school and individual student data alongside teacher predictions is a sensible solution, even if some students are likely to be unhappy. (In light of this, it’s great that students will be given the option to take an exam later in the year if they’re not happy with their assigned grade). It also seems to me to be more reliable and fair than relying purely on teacher predictions.

Without getting all students to take an exam later next year, we’ll also never find out how accurate the process that Ofqual settles on really ends up being… though I suspect that even if Ofqual were able to assign grades that perfectly predicted the grades students would have obtained in their GCSE exam, we’d still see some unhappy students, teachers and parents.